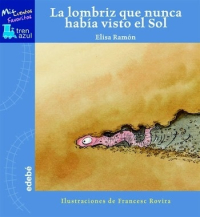 AÑADELO A TUS LIBROS FAVORITOS
Con esta compra obtienes 20 páginas MundoCervantes
There was once a worm who lived underground. One day, fed up with hearing about the marvels of the sun, he decided to take a peek outside and see. But that day it was cloudy and after asking and finding out, he gave in, but just when he was returning, he saw it, yes he saw it there, and full of emotion he went back underground to tell his friend the ant about it. She didn?t believe him, it was a grey day, but he insisted so much that in the end they went back outside. Then the sun began to tremble and it fell exploding into a thousand pieces. He?d mistaken it for a huge peach!!! Ha, ha, ha what a surprise and what a laugh, but the poor worm, he was so disappointed? good job just then the wind blew and the worm could at last see the sun he had so yearned for and gobble up a delicious peach.