A Study in Scarlet & The Sgn of the Four 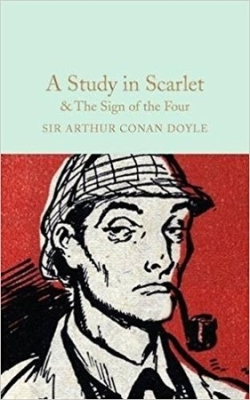 A Study in Scarlet introduced the great scientific detective Sherlock Holmes and Doctor Watson, his friend and chronicler, to the reading public. This novel, a cornerstone in the annals of crime fiction, tells of their first meeting and how they set up in rooms together in Baker Street. It is not long before the charismatic sleuth and his faithful companion are plunged into a dramatic mystery which starts with the discovery of a corpse in a deserted house and the letters RACHE scrawled on the wall in blood. The Sign of the Four, the second Holmes novel, presents the detective with one of his greatest challenges - solving the theft of the great Agra treasure in India. In these two classic novels you have the foundation of the Sherlock Holmes legend. As well as his witty and illuminating Afterword to this edition, David Stuart Davies, the illustrious editor of Sherlock magazine, has provided a fascinating chronology of the Sherlock Holmes Stories.

With an Afterword by David Stuart Davies, a Fellow of the Royal Literary Fund, and an authority on Sherlock Holmes. He has written the Afterwords for all the Macmillan Collector's Library Holmes volumes.