Year of the monkey 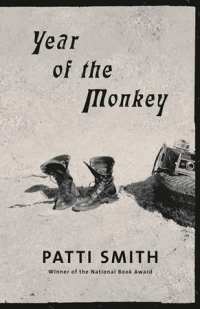 AÑADELO A TUS LIBROS FAVORITOS
Con esta compra obtienes 50 páginas MundoCervantes
100% Pago seguro | 3 a 5 días
As she wanders between waking and dreaming in a year filled with the death of a close friend and the political turmoil of the 2016 election, musician and National Book Awardwinner Smith (Just Kids) contemplates dreams and reality in this luminous collection of anecdotes and photos. In light of her 70th birthday, Smith writes lyrically on various subjects: she describes Allen Ginsbergs poetrywhich she carries along her travels­as an expansive hydrogen bomb, containing all the nuances of his voice. On the terrible soap opera called the American election, she declares that the bully bellowed. Silence ruled... All hail our American apathy, all hail the twisted wisdom of the Electoral College. Watching a Belinda Carlisle video, shes caught up in Carlisles infectious beat, and she imagines a nonviolent hubris spreading across the land. At one point, Smith learns from a stranger that, in dreams, equations are solved in an entirely unique way, laundry stiffens in the wind, and our dead mothers appear with their backs turned. Smith discovers that her most meaningful insights come from her vivid dreams, and she feels a palpable melancholia over having to wake up from them. Smith casts a mesmerizing spell with exquisite prose. Agent: Betsy Lerner: Dunow, Carlson & Lerner Literary. (Sept.)