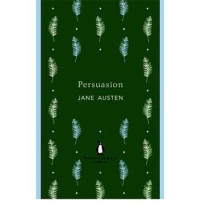 AÑADELO A TUS LIBROS FAVORITOS
Con esta compra obtienes 20 páginas MundoCervantes
'Her attachment and regrets had, for a long time, clouded every enjoyment of youth; and an early loss of bloom and spirits had been their lasting effect'

Anne Elliot's youthful bloom has faded and she has few romantic prospects, having being persuaded to break off her engagement to Frederick Wentworth eight years earlier when he was a naval captain with neither rank nor fortune. But now he has returned and Anne, who has bitterly regretted her decision ever since, sees the possibility of a second chance for happiness.

Persuasion, Jane Austen's last completed novel, is a brilliant satire of social ambition, but above all a moving and elegiac love story tinged with the heartache of missed opportunities.